Chester Weber is the Top Driver in the World 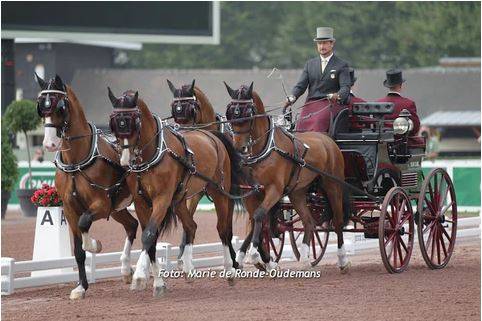 Simply put, Chester Weber's 2014 has been nothing short of spectacular. He currently holds the top ranking in the world on the FEI Top Driver Award Standings for Four-in-Hand. He and his team continue to be the leading Four-in-Hand team in the world, which was cemented by his silver medal at the WEG

The FEI Four-in-Hand rankings are determined by a combination of success throughout the year, and Chester's 2014 resume has very few holes. Chester has been seemingly unstoppable, taking the FEI ranking with a host of wins including being the first American to win the Four–in-Hand at CAIO4* Aachen, winning at CAI3* Windsor, defending his 11th USEF National Four-in-Hand Driving Championship and setting an impressive record dressage score (30.89) at the Kingdom of the Sun CDE.

Chester has no doubt impressed the equestrian world this year, and we look forward to seeing what else he has in store.